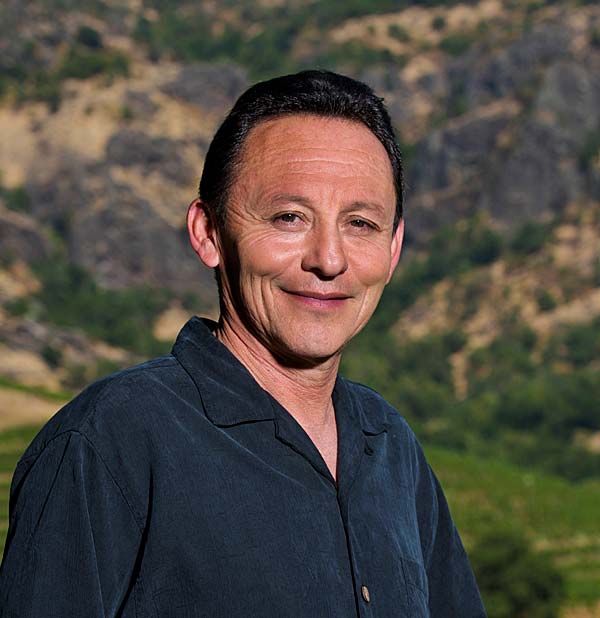 Elias Fernandez has been making wine at Shafer Vineyards for more than 30 years. Working side by side with John and Doug Shafer, he has played an integral role in forging a style of boldness and elegance that has been embraced by wine lovers throughout the world.

Elias earned his success in part because he knows Napa Valley vineyards from the roots up. He knows first-hand what it’s like to work in 100-degree heat among dusty vine rows as well as the difficulties of pruning vines in the freezing winter pre-dawn light.

Elias’ father came to the U.S. from Michoacan, Mexico and worked in the San Joaquin Valley as a farm laborer. His mother was born in Napa Valley where her father was a laborer who helped build the rail line that runs through Yountville.

Both parents picked prunes and walnuts in the days before wine grapes became the predominant crop in the Valley. Some of Elias’ earliest memories are in these orchards.

In junior high, Elias started working in vineyards with his father where he learned to drive tractors, train and prune grapevines and from both parents he learned the value of hard work and selfreliance.

“From my dad I learned a lot of common sense things — working with people, driving a tractor, fixing trellis systems and everyday work in the vineyard,” Elias says. “From my mom I learned that I needed an education.”

In third grade with his mother’s encouragement he had started playing the trumpet in the school band. He played all the way through high school and distinguished himself to such a degree that he received a Fulbright music scholarship to attend the Jazz program at the University of Nevada, Reno. He is the first person in his family to go to college.

After a year in Reno Elias says something just “clicked” and he began to feel an urge to return to his agricultural roots.

“I started to look around Napa Valley and realized what a beautiful place this is,” he says. “I began to think, ‘what about winemaking?’”

His mother asked around to help Elias get an idea of what kind of prospects such a venture might offer. She came back to him shaking her head. The news wasn’t good.

“Everyone told her it didn’t look like there was a big future in winemaking,” he says.

Even so, in 1981 he enrolled at University of California, Davis to study enology, the science of winemaking.

“I went from studying music to science,” he says, recalling the difficulty of the switch.

His first chemistry class was held in an auditorium with 1,000 other students.

“It was overwhelming,” he says. “You have to remember where I came from — my graduating class at St. Helena High was just over 100 kids.”

During his college years, Fernandez grew more knowledgeable through internships at local wineries including Schramsberg Vineyards, Louis Martini Winery and Cuvaison — learning bottling lines, cellar operations, how to drive a forklift and more.

Three weeks before graduation, in 1984, he was hired as assistant winemaker at Shafer Vineyards working with Doug Shafer.

The winery was then just five years old. Those first ten years were some of the hardest of his life.

“We were still learning how a winery works — how to crush, how to get the juice into the tank, how to get it out. It was trial and error. We started off crushing white grapes like red. And we weren’t exactly ringing the bell on wine scores either,” he recalls. “Thank God we were young because we worked ourselves to death.”

For several years Elias shared co-winemaker duties with Doug Shafer. Then in 1994 Doug became winery president and Elias took on the winemaker title with all of its duties. Over time, life at Shafer Vineyards became less about logistics and more about constantly improving the way they crafted their wine. The team of John Shafer, who started the winery, Doug Shafer, his son, winery president, and Fernandez worked together to create a “house style” of wine that is bold and elegant.

In 2002 both Quarterly Review of Wines and Food & Wine magazine named Elias “Winemaker of the Year.” Shafer Vineyards was selected as one of the “25 Great Vineyards in the World” by Wine & Spirits magazine.

On October 2, 2002 he accepted a prestigious “Hall of Fame” award from the Hispanic Scholarship Fund in Washington D.C. and attended a White House reception hosted by President George W. Bush.